Good morning year six. Today’s computing lesson is touch typing! Touch-typing means being able to type at speed and with accuracy, without needing to look down at your hands on the keyboard, and it’s this that makes touch-typists so speedy.

There are four levels to play, each divided into three stages.

You start by learning the home row keys. Each stage builds on previous lessons, introducing new letters as you progress. You’ll soon be touch typing like an expert! At the end of each level you can test your typing speed and get a fun reward.

Why learn to touch type?

When you can do it well, touch typing is the fastest way to write. Many people quickly learn to touch type faster than they can write with a pen. The important things to remember are:

■  Use the correct fingers

■  Always rest your wrists on the desk.

You should take a rest, and shake your hands and arms to relax your muscles if you get tired.

You will need headphones or speakers to enjoy the song and dance in each game.

Sit comfortably with your back up straight and your feet on the ground!

Computing is a bit different this week and your task is to create ‘What makes a good computer game?’. You can present this information in any way that you like! Please read below to understand how computer games are made!

You could say that computer games are simply games that you play on a computer. But there is more to it than that. In the UK, computer games are a multi-billion pound industry . There are games for all age ranges and interests. You can play games on lots of devices including mobile phones, tablets, computers and consoles.

All games come from a basic idea that is then developed into a game. One of the earliest computer games was called Pong. Pong simply allowed you to play a game of table tennis on a computer. It was very popular from the moment it was launched.

Coming up with an idea

So the first thing to do is come up with the idea for your game. You could start with a pirate looking for lost treasure, a vet caring for animals on a safari park or a spaceship captain exploring an alien galaxy. When you are coming up with your idea you can ask yourself questions. For example, what is the objective ? What are the rules ?

There are lots of different types of games. These types are called genres. Different genres include: racing games, adventure games, puzzle games and platform games. Once you have your idea and have decided on a genre you can start designing your game.

Everyone has their own opinion about what makes a good game. But a game usually needs good graphics, interesting stories, characters and nice music to make it enjoyable. Other aspects that are important include: Gameplay – How the game plays is very important. While the look of games has changed a lot over the years it is gameplay that makes you want to play a game. Games must be fun and entertaining. Difficulty – Challenge is really important in games. If the game is too hard you might become frustrated with it and give up. If a game is too easy you might finish it too quickly and find it boring. Games need to balance these two extremes. Feedback – Giving the player feedback is also important. This could be a simple score or unlocking skills or extra levels for players who do very well.

Games keep us coming back

Computer games have a few methods of keeping players coming back for more. Games will often increase their difficulty and introduce new game mechanics to keep the player interested. The difficulty will normally change as you get further into the game. Enemies might become harder to defeat or the speed of the game might increase. New mechanics can be introduced as the game progresses. This could be adding new powers like a super jump or skills to open locked doors.

A tutorial is a section or level at the start of a game that shows you how to play. Tutorials are common in modern games.

How can you program a computer game?

Games sold by companies use complex code . Often there is so much code that it has to be ‘decomposed’ (made into smaller parts or elements). Each of these smaller elements can then be programmed. Simple games can be programmed using programming languages like Scratch , Kodu or Project Spark .

If you want to make your own computer game you might need to think about:

Answering these questions is part of the development process. It will give you an idea of how your game will behave, which will help you make the best game you can.

In this activity, you will make up a dance routine for a partner to follow.

What will you learn?

Algorithms – An algorithm is a precise sequence of instructions, or set of rules, for performing a task.

2) Have some fun by establishing some dance moves to add to your dance routine. Your dance moves could be very simple (e.g. jump, spin, wave arms), or more complex (e.g. floss, dab).

3) Ensure that you all know what each dance move is and that you have a card, picture, painting or action figure to represent that dance move. Create multiple copies of each card so that you can have repeated moves.

4) Explain: An algorithm is a sequence of instructions to get something done.

Time to talk 1) Place a sequence of 5 or 6 move cards and ask your partner to follow the instructions to complete the dance routine. Ask what happens if you swap two cards around? Explain that changing the order of the cards will change the sequence of the routine.

2) Ask your partner to make their own dance routine. Have they found some funky music to go with it? Encourage your partner to test their different algorithms by following the routine themselves.

3) Once they have created their Dance Moves sequence, get them to invite family members to have a go. Have fun with your dance routine by using video messaging with distant family.

1) Look at successful examples of your partnerss dance routines.

2) Use the key vocabulary for this activity: algorithm, sequence, repeat.

3) Explain that the instructions they have made are algorithms – a precise sequence of instructions for performing a task.

• Keep dance routines short and simple to start with, for example using only 3 or 4 dance cards. Children may need support creating their own routine.

• Encourage your partner to create longer dance routines for a whole piece of music. Can they introduce a repeat card? Can they create their own dance outfits or videos?

As we are spending more time online during lockdown, it is important to remember about online safety! Below are some great activities for ages 4-13 to support parents and carers to use at home!

An algorithm is a sequence of instructions or a set of rules that are followed to complete a task. This task can be anything, so long as you can give clear instructions for it.

For example, to make yourself a drink you have to follow a sequence of steps in the right order. If you do something in the wrong order you might end up making a mess.

When you write an algorithm you need to include precise, step-by-step instructions.

Here are the instructions for making a smoothie:

Imagine if we missed out one of the steps or reversed the order. We could end up switching on the blender with nothing in it. Or there could just be milk in the blender and no fruit. 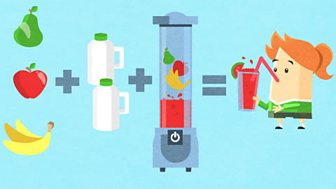 Computers won’t understand your algorithm as they use a different language.

It will need to be translated into code which the computer will then follow to complete a task.

Some that you may come across are Logo, Scratch, Blockly, Python and Kodu. Each of these languages are suited to different things.

Your task today is to create an algorithm for any task that you are able to do at home. Have fun, be creative and why not share your algorithm on our blog?